For many people, prayer beads offer a useful anchor and aid to prayer and meditation.   There is no one "right" way to pray with prayer beads.  Below are some resources I've developed to help you explore praying with prayer beads and song.  Experiment, and see what works for you! 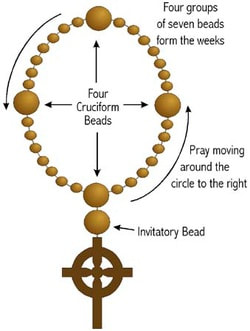 Since the earliest of times, people have used pebbles or a string of knots or beads on a cord to keep track of prayers offered to God.  Virtually every major religious tradition in the world uses some form of prayer beads.

Anglican Prayer Beads are a relatively new form of prayer, blending the Orthodox Jesus Prayer Rope and the Roman Catholic Rosary. The thirty-three bead design was created by the Rev. Lynn Bauman in the mid-1980s, through the prayerful exploration and discovery of a contemplative prayer group.

The use of the rosary or prayer beads helps to bring us into contemplative of meditative prayer—really thinking about and being mindful of praying, of being in the presence of God—by use of mind, body, and spirit. The touching of the fingers on each successive bead is an aid in keeping our mind from wandering, and the rhythm of the prayers leads us more readily into stillness.

Symbolism of the Beads
The configuration of the Anglican Prayer Beads relate contemplative prayer using the Rosary to many levels of traditional Christian symbolism. Contemplative prayer is enriched by these symbols whose purpose is always to focus and concentrate attention, allowing the one who prays to move more swiftly into the Presence of God.
The prayer beads are made up of twenty-eight beads divided into four groups of seven called weeks. In the Judeo-Christian tradition the number seven represents spiritual perfection and completion. Between each week is a single bead, called a cruciform bead as the four beads form a cross. The invitatory bead between the cross and the wheel of beads brings the total to thirty-three, the number of years in Jesus’ earthly life.

Praying with the beads
To begin, hold the Cross and say the prayer you have assigned to it, then move to the Invitatory Bead. Then enter the circle of the prayer with the first Cruciform Bead, moving to the right, go through the first set of seven beads to the next Cruciform bead, continuing around the circle, saying the prayers for each bead.

It is suggested that you pray around the circle of the beads three times (which signifies the Trinity) in an unhurried pace, allowing the repetition to become a sort of lullaby of love and praise that enables your mind to rest and your heart to become quiet and still. Praying through the beads three times and adding the crucifix at the beginning or the end, brings the total to one hundred, which is the total of the Orthodox Rosary. A period of silence should follow the prayer, for a time of reflection and listening. Listening is an important part of all prayer.

Begin praying the Anglican Prayer Beads by selecting the prayers you wish to use for the cross and each bead. Practice them until it is clear which prayer goes with which bead, and as far as possible commit the prayers to memory.

Find a quiet spot and allow your body and mind to become restful and still. After a time of silence, begin praying the prayer beads at an unhurried, intentional pace. Complete the circle of the beads three times.

When you have completed the round of the prayer beads, you should end with a period of silence. This silence allows you to center your being in an extended period of silence. It also invites reflection and listening after you have invoked the Name and Presence of God.

Prayer Cycles for Praying the Parables

Prayer Cycles for Praying the Beatitudes

For a variety of reasons, some people are unable to be physically present with their worshipping communities for the important liturgies of Holy Week and Eastertide.  I developed the following Prayer/Song/Scripture cycles as a way to condense these central public liturgies into a form that might be useful for private devotions--either in preparation for participation in public worship (for those who ARE able to participate with their worshipping communities) or as a way for individuals to join their prayers to the prayers of the worshipping community (when they simply cannot be present in person.)

Several years ago for a summer camp I developed these cycles of prayer and song to accompany five of the Parables of Jesus that are among the parables that storytellers regularly share with children in Godly Play.

When considering the formation of children (or anyone for that matter), I often ask the question--what do we think this is FOR?  What is the liturgy FOR?  What is a mission trip FOR?  What are these bible stories FOR?

I wonder if the parables are, among other things, for helping us pray?  How might various bible stories offer us a template for prayer and for life?

In Summer of 2022, a small group met at St. Mark's Episcopal Church in Albuquerque, NM to take. 'deep dive' in to the Beatitudes. The following prayer cycles, which incorporate the words of the beatitudes in Aramaic as well as English (the King James Version and the First Nations Version), were part of our exploration.  You can learn more about our group and learn the Aramaic chants on the Beatitudes Page.